Take Me Back: Napster 20 years later

In our office, a main topic of discussion that comes up alot is old school '90s/'00s technology. With me being born in the year 2000, I often look at everyone cluelessly - wondering what are they talking about. So our team thought it would be fun to bring these conversations into public viewing while I educate myself on where some of the technology we use today really started.

First up on our list: Napster. Do you know what Napster is? Because I didn’t.

To kick things off, we asked our social media followers (something certainly not a thing back in the 90s) for their input - the social media poll sought to find out how many of you remember Napster, or were like me having never heard of it before. Turns out the majority knew what Napster is... 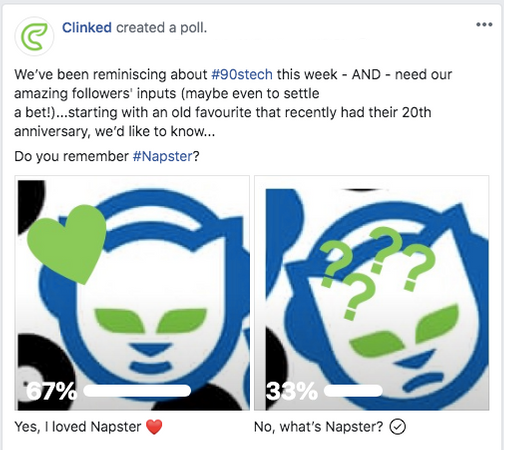 For those like me, I thought I'd share my secondary research - Napster was the first ever P2P music sharing service launched in 1999. It was a revolutionary software that allowed people to download MP3 files for free and share them amongst other Napster users. The company became extremely popular almost instantly with approximately 80 million registered users at the height of their success, but very quickly ran into difficulties as they faced legal challenges against copyright laws.

On to the primary research, I decided to ask some of my team members a few questions about their experiences with Napster, mainly out of curiosity and to get a better understanding of it.

The responses were great, when I asked everyone if they can remember Napster and how they’d used it - memories started coming back. People were reminiscing about their time in uni halls. How they would leave their laptops running overnight (to the point where they would almost explode) just to download their favourite albums and the latest movies - can you imagine? Our CRO even went to school with one of the founders of Napster, Shawn Fanning.

This lead me to wonder what they would compare Napster to today. Some said torrenting, others thought Napster paved the way for the likes of Spotify and other music streaming services.

“I think Napster was a milestone in the industry of music, that’s how everything started with Spotify, it led to the idea of building a service that made streaming music legal somehow, so from that perspective I think it was really important” - Tayfun Bilsel, CEO @ Clinked.

And my final question - what happened to Napster?

Most seemed to think it was the music industry that killed Napster. Based on my research I was able to answer these questions...

In the year 2000, just a year after they’d launched, they’d already had two lawsuits filed against them by the band Metallica and rapper/producer Dr. Dre. In the same year they were also sued by several different record labels through the RIAA (Recording Industry Association of America) for unauthorised distribution of copyrighted material. After an ongoing battle and eventually losing the case, Napster was forced to shut down business after the RIAA obtained an injunction that they were unable to comply with - RIP Napster.

Although it turns out that wasn’t the end of them forever. In 2002 - a third party bought out Napster, giving the iconic name a new lease of life by rebranding the existing music sharing service Pressplay to Napster. However from what I’ve heard - it was never quite the same despite continuous development of the product. In 2011 it was acquired by another music streaming service Rhapsody, today they continue to offer the subscription based music and radio streaming service, Napster.

If you were a user of Napster at all in your lifetime, I hope this you appreciated this throwback. Or if like me you’d never heard of it, hopefully you’ve enjoyed learning about a piece of music tech history.

Do you have any old favourite '90s/'00s tech or software you'd like to suggest we look at next? We’d love to hear about it - let us know in the comments below or send us an email us at info@clinked.com

What are Online Workspaces?